Stuart Syvret and The Fourth Estate. 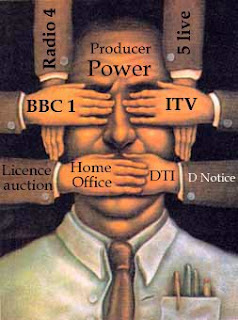 In this next instalment of our exclusive and in-depth interview with Former Senator Stuart Syvret we discuss Jersey's media, or "State Media" as it is increasingly becoming known. In particular we look at the BBC and its role as a credible, reliable and impartial news source.


Mr Syvret's opinion of the BBC is, just like a growing number of others, very sceptical and untrusting and, in our opinion, deservedly so.


The BBC has reported on the "prosecution case" against Former Police Chief Graham Power QPM, The prosecution case being the discredited "Wiltshire Report." This Report has been, by a number of our State Media, peddled as an "independent" Report and that it's contents are "findings." We offer the view that firstly this Report was not independent it was commissioned for disciplinary purposes which produced not a single disciplinary action against the Former Police Chief. It's "findings" are nothing more, in our opinion, than unfounded, un-proven allegations, yet our Home Affairs Minister and the State Media cling on to it as if it has some kind of credibility.


The BBC has been in possession of the Former Police Chief's response (defence case) to the Wiltshire Report (prosecution case) for somewhere in the region of 3 months or so yet they've not reported a single word of it as they have the prosecution case. It is believed that the Former Police Chief's defence case, on a journalistic level, is "dynamite" and could blow the official version of events surrounding the Historical Child Abuse Enquiry clean out of the water, although we have already done that on this, and other Blogs. But regardless of whether this document is dynamite, or not, it is still the defence case and the BBC have an obligation, in the interest of fairness and balance, to publish it, or parts of it like they have, parts of the prosecution case.


Bloggers in Jersey are fast becoming the Fourth Estate because of this perceived, or actual, bias displayed by the State Media and it is a burden none of us should have to shoulder. Mr. Syvret tells us in the Interview (below) that he might be forced into publishing, on his Blog, Mr. Power's defence case if the State Media won't, should he or any Blogger have to do this just to add some balance to the stories put out by the State Media?

Of course we must concede that we are not professional "accredited" journalists and there could be a plausible explanation as to why the BBC can report on a prosecution case, then hang onto the defence case for so long, which it has been said, could be redacted in two hours and a bottle of Typex . If there is a plausible explanation for this then we would like to hear it.

The distrust of Jersey's State Media is compounded by the Press Statement released by the Jersey Care Leavers Association (below). It was sent to, as far as we know, all island Media. The JCLA is not convinced it will be published in any of the island's State Media so we are more than happy to publish it, in its entirety here. It is another reminder of the part played by the island's media concerning the Child Abuse atrocities that were able to occur, for decades, until the veil of secrecy was lifted by Former DCO Lenny Harper, Graham Power QPM, and their team who were the first Police Officers, in Jersey's History, to investigate the allegations concerning institutional Child Abuse. It is also another reminder that amongst all the legal/political wrangling there are real people who have had their lives, dreams, hopes, confidence and trust in humanity shattered by the very people who were supposed to care for them............The State of Jersey.


PRESS STATEMENT
Further to the Home Affairs Ministers statement on the Historic Abuse Police Enquiry and the role of the accredited media, the JCLA would like to offer the following response.
Whilst it is some small comfort, to at last have Senator Le Marquand’s recognition of the fact that matters were grossly exaggerated many times by the press, it could also be said to be too little, too late, as indeed Mr Harper has stated.
Had the BDO Alto Review not been held, it is doubtful that this statement would have ever been made. We must also, not lose sight of the fact that this review was held due to the hard work of a local blogger and the determination of the Scrutiny Panel headed by Deputy Trevor Pitman.
Notwithstanding the above, the reputations of two honourable police officers, and abuse survivors have also been brought into question, and the three conclusions mentioned by Senator Le Marquand from the Wiltshire Reports clearly show that the media frenzy that surrounded this whole sorry affair was very misjudged.
Indeed, Senator Le Marquand himself allowed this misinformation to be published, and indeed at times fanned the fire by his defensive answers to questions in the States Chamber. It was not helped at all by calling Mr Harper ‘an incompetent maverick’, amongst other derogatory statements which are well documented.
Part of an editorial comment in the JEP dated Monday 24th August 2009 says: ‘In addition, on the strength of what was clearly a flawed investigation from its very outset and the hype which surrounded it, the Island has paid a terrible price through the enormous cost of misdirected police work and, more importantly, in terms of its reputation’. Quite clearly Wiltshire did not think this the case.
There will always be a case of ‘we beg to differ’ over the question of the child’s skull/coconut, but it cannot be dismissed that 65 children’s teeth were found under the floorboards, fresh, fleshed and burnt bones were found, the matter of the lime pits and many other questions left unanswered. There are the abused whose cases were never brought before the Courts despite ample evidence, who will never feel that the Police investigations were full and properly concluded, and questions relating to the behaviour of Mr Gradwell.
Only when a full, transparent and thorough Committee of Inquiry is approved and finalised will it be possible to say that there is a conclusion to this affair. (END)


It remains to be seen if this Press Statement will see the light of day in any of Jersey's State Media.

It also remains to be seen who will publish the defence case of Mr. Graham Power QPM first, a Blogger (The Fourth Estate in Jersey) or the State Media.

Posted by voiceforchildren at 10:55