While perusing my fast becoming extensive video collection I stumbled across this one of our Education Minister Deputy James Reed. I noticed I hadn’t uploaded it to Youtube, so thought I would rectify that, which I have.

I was going to do a Blog on him and have e-mailed him requesting an interview. Rather than waiting around to see if he’ll even acknowledge my e-mail I thought while uploading this video to Youtube I’ll give it another run on here.

It is unfortunate that he appears to be following in the footsteps of his predecessor Citizen Mike Vibert but I will write about that in more detail at a later date.

In the meantime, and while I wait for his reply, we can relive the day he got elected as Education Minister and where his priority’s lie.

Looking at it, the writing was on the wall from day one!!

Posted by voiceforchildren at 19:28 7 comments: Links to this post

Depending on what angle you are looking from, the protest at the swearing in of our new UN-ELECTED Balliff was a resounding success. Naturally I can only give it to you from my angle and this is why I see it was a success.

Late last year when the HDLG investigation was in full swing and the Jersey Care Leavers Association had been formed, I e-mailed the JCLA offering my support, in the way of a small financial donation, fund raising, printing leaflets, raising awareness etc.

To my dismay I had no reply and therefore was not taken up on any of my heartfelt offers. It was the time of the Senatorial elections, and knowing one of the candidates was a care leaver (not abused) I explained about the e-mail I had sent with no reply. He told me that it might be because the Care Leavers just don’t trust anybody, and as they were not long formed as a group they were probably not very organised yet but I should get a reply soon……….I never did.

However I, in my own way, persisted by Blogging, contributing to Blogs and forums to highlight the struggle of abuse survivors and the injustices I believed, and still do, they were experiencing and still are.

To cut a very long story short, I have now become friends with a number of abuse survivors who, when we first met, more than likely didn’t trust me. One thing, in my opinion, was apparent and that was they were still “victims” that is to say they were in “victim mode” They (not all) had all but given up any kind of hope, didn’t see the point in trying to get justice, were just brow beat and completely demoralised.

On Thursday July the 9th 2009 at the protest of the swearing in of Michael Birt as Balliff I saw, for the first time, in one particular abuse survivors eyes and heard in her voice not only hope but the feeling of POWER. She asked “when is the next protest”? Up until a few weeks ago she had neither.

Some will argue that is a false sense of power and hope and it is not fair to string her , and others along, I would argue the opposite. I know the nightmares some of these people suffer, the self harming, the suicidal tendencies, the feeling of no self respect or self esteem, the feeling of complete hopelessness and helplessness. If their pain and anguish could be relieved by the feelings of power, strength and hope, even if it was only for a couple of hours on a Thursday afternoon then, in my opinion it was a success!

All those who were protesting became a part of a landmark day in the history of Jersey. Never, to the best of my knowledge, in EIGHT HUNDRED YEARS has there been a protest at the swearing in of a Balliff, that was until Thursday July the 9th 2009. As much as the “accredited” media are trying to play this down it is in-escapable, HISTORY WAS MADE THIS DAY!………..Were you there?

The video’s below were taken by two members (on separate cameras ) of “Team Voice” which is expanding its membership and readership. The video footage, in my opinion, is in stark contrast of what has been reported by the “accredited” press. From what I have seen of our local media reporting of the event it was just a little bit of a Senator Syvret side show.

Nothing could be further from the truth. This demonstration was organised by the Care leavers themselves and a handful of supporters. They paid for and designed the “Justice” t-shirts, the banners, the whistles, the placards, all with their own time and money. Senator Syvret had very little input into the making of this demonstration. He did no more than any of our elected “representatives” should and that is to stand shoulder to shoulder with the people they are elected to represent and credit to him for doing it.

Don’t get hoodwinked into the “media spin” of diverting the attention from allegedly horribly abused children in our States “care” system and the subsequent alleged cover up and not prosecuting States “care” workers and turning it into the Stuart Syvret show.

This is about “JUSTICE“?, CONCEALMENT COVER UP, THE JERSEY WAY and doing everything we can to either bring the alleged victims some justice or exposing our Government for, at the very best, ITS FAILINGS.


Posted by voiceforchildren at 14:00 18 comments: Links to this post

Below is some video of the protest on the above date and some extra text is with it on Youtube.

More and more people, now that protests are becoming regular, are starting to show support for victims of child abuse and are willing to stand alongside the protesters. There are more protests in the planning, which will be getting more high profile as the protesters are starting to get organised.
It is such a shame people are being driven to protesting but the government only have themselves to blame.

Today History was made but I will edit a video and tell you more about that in a day or so.

Posted by voiceforchildren at 19:02 5 comments: Links to this post

Below is some edited interviews with Deputies Trevor Pitman, Montford Tadier and Shona Pitman. The only three elected “representatives” (besides Senator Syvret) to turn up and support, not only abuse victims, but all the people who have allegedly been wronged by our judicial system, law firms and Oligarchy.

I have to say I was not surprised to see all three of them there. There’s barely a Saturday I walk through town and don’t see Trevor and Shona Pitman collecting signatures on behalf of their constituents whether it be for the residents of Ann Court, the (ex) Woolworth’s workers, those against GST etc.

After the protest I went up to Mont Nicole school where my children were taking part in a Karate demonstration to help raise money for EFLO (Education Fund for Luweero Orphans) And who should I see there? But the three deputies, Pitman’s and Tadier . They too were raising money (all afternoon) for EFLO.

I suppose it’s all about “SUPPORT” not just saying “oh that’s a good cause” or “my SYMPATHY goes out to the victims of abuse” or asking the odd question in the States. It’s about getting off your arse and nailing your colours to the mast, standing alongside the very people you are elected to “represent”. So credit to Senator Syvret, Deputies Trevor and Shona Pitman and Deputy Tadier.

Posted by voiceforchildren at 15:09 8 comments: Links to this post 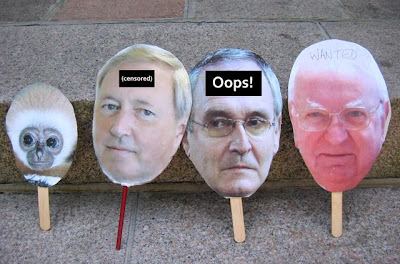 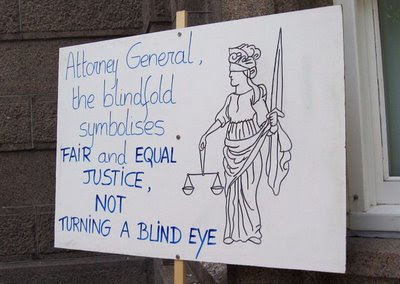 Well the Protest, as planned, went ahead and was, in my opinion a huge success.
It was a success because more people were at this one than the last. Which could mean people are starting to get over the fear factor, which might mean the Solicitor General is frantically writing up gagging orders as I type……… a Tim?

It was also a success because the organisers are starting to get a little organised, putting together banners, placards, masks, in excess of 3000 leaflets, Press releases and many other things.

This will be sending a message out to our ruling elite, and our elected “representatives” that the peasants are starting to revolt. Most of the people I spoke to at the protest had, like myself, tried going through all the correct channels and only ever been shat on and felt they have been forced, by the "ruling elite" to take to the streets in protest.

Now the Solicitor General is going to have his work cut out slamming a gagging order on everybody at that Protest and indeed the protests yet to come, and believe me there are plenty more to come. So our ruling elite, however long it takes, are going to have to start paying attention to the electorate or they are going to have a protest on their hands every week!

I still maintain there should be no need for protests but this is where our Government has taken us. One thing that was evident today was the amount of children that were on the march. These are the people the next generation of Politicians will be facing, and they are growing up with little or no respect for (what I and a growing number of parents/people believe to be) a corrupt Government. Mind you Ian Le Marquand will probably have them locked up as soon as they are 14 years old!

I have video footage of the protest, which includes interviews with three Politicians who were not only at the Royal Square but walked alongside the protesters through town. I hope to have something edited in the next couple of days and will publish on here.

In the meantime my admiration and respect goes out to Carrie, Dannie, all abuse survivors and all those who gave up their time to make this protest the success that it was. I would also like to thank "Jersey Cam" who supplied the photo's in this Blog by uploading 36 of them HERE
Posted by voiceforchildren at 18:43 9 comments: Links to this post

Who can turn a blind eye?

As most will be aware there is a march in support of child abuse victims and the lack of justice in Jersey. For those who are not aware, it will take place this Saturday the 4th of July 2009 at midday. Abuse survivors and supporters will walk from people’s park to the Royal Square.

Child abuse takes many forms it is not exclusive to sexual abuse. Children have been for years, and still are, being abused whether it be sexually, physically, or emotionally. Not only by their parents but by family members, people of authority and charged with their “care” and complete strangers.

I defy anybody with just a miniscule of conscience to watch this video and not feel compelled to support child abuse victims and spare them an hour of your time this Saturday.

Do you know, I can’t help feeling, after watching this video, reading the Lyrics, and listening to some of the abuse survivors that in some cases it’s the lucky one’s that die.

Posted by voiceforchildren at 08:51 11 comments: Links to this post