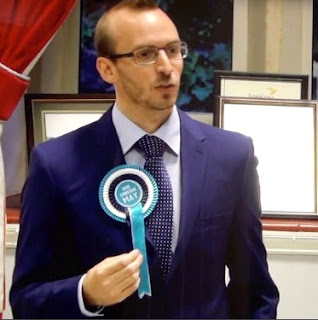 Christian claims not to be a part of "The Establishment" and also claims he is not anti-establishment. So I thought; "what could he be?" Then it came to me................ Being a fan of the Inbetweeners TV programme, I realised that he's an Inbetweener, which also reminded me of where I had seen that involuntary arm movement before. It was on an episode of the Inbetweeners. (Series 3 episode 2)
In a very short (35 second) video clip (below) we have squeezed in four separate Hustings Meetings to demonstrate this.

The video below is published in the spirit of light-hearted fun in an attempt to inject a little humour into the political process/By-Election which can get quite ugly at times. In this regard we will NOT be publishing any negative comments against any of the candidates in this Blog Posting.

If you wish to leave a comment supporting your favoured candidate they are:

All candidates opening speeches (from St. Clement Hustings) can be viewed HERE. Not forgetting you can also vote for your preferred candidate on the poll situated at the left hand-side of this page.

Posted by voiceforchildren at 18:22 307 comments: Links to this post