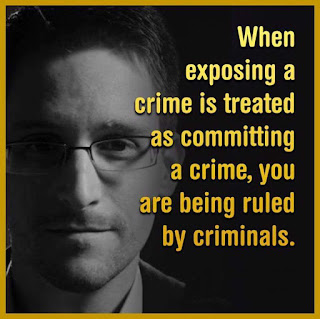 On 28 May we published THIS BLOG warning readers of the latest tool being used by the former Attorney General (Tim Le Cocq) and the government to silence political dissent, and those of us exposing the Jersey Child Abuse cover-up among much more alleged corruption perpetrated by powerful people who enjoy complete impunity on the island.

It came in the form of a proposition (P.19/2016) brought by the Chief Minister but presented by Senator Philip Ozouf. Who had this to say concerning the Charlie Hebdo attack in Paris; "all communities from around the world needed to stand in solidarity with our French cousins to condemn what as an unacceptable infringement on the ability for freedom of expression and speech." Of course offending Muslims is one thing but "offending" people in Jersey is a lot more serious than that!

As we correctly predicted the proposition was adopted in the region of forty votes in favour - five against. The votes can be viewed HERE, HERE and HERE.

During the debate, where those who are in favour of free speech clearly won the argument, but lost the vote, some very poignant and informative speeches were made against the proposition, not least by St Helier (District NO.1) Deputy Russell Labey. (video below)

The Deputy warned of possible "sinister consequences to free speech" "Sleepwalking into dodgy legislation." He pointed out that it is legislation that people might expect to find in "totalitarian states like North Korea."

He went on to explain how Bloggers gained the trust and confidence of whistle-blowers who leaked public interest documents to us. The Mainstream media (MSM) were not trusted and were believed to have "gone native" with the Jersey establishment. The Deputy mentions, in his speech below, the leaking to Bloggers of the BARTON REPORT.

The Barton Report was a disciplinary investigation against the three cops accused of illegally bugging a car used by member(s) of the Curtis Warren gang. The investigation was instigated by the Law Officers Department (LOD).

It was leaked to Bloggers because it was believed the MSM would bury it which demonstrates the trust and confidence that Bloggers have gained from whistle blowers.

The Barton Report shows that it is the Law Officers themselves who have questions to answer, and despite instigating the investigation, the Law Officers did/would not fully co-operate with it.

The link also contains further links that are of huge public interest, including, "Operation Invicta" which is the criminal Investigation against the cops. Again the cops were exonerated but left question marks over the LOD.

Of course the Barton Report is not the only document/information leaked to Bloggers over the years as regular readers will be aware. We will look to publish a few of those documents over the next couple of days in the comment section of this posting.
In the meantime, credit to Deputy Labey, and others, for seeing what this latest piece of legislation is, and for having the courage to speak up about it. Speaking up/out, as a result of this legislation will soon be a thing of the past in Jersey.


Posted by voiceforchildren at 12:13 42 comments: Links to this post


Today saw the final Public Hearing of Jersey's Child Abuse Committee of Inquiry with Counsel to the Inquiry delivering its final submission to the Panel. The submission, and transcript, should be available on the Inquiry's website soon.

Today's submission from Counsel addressed a number of issues including the correction of the Law Offices' Department assertion where, in its submission it was claimed, that former Senior Investigating Officer Lenny Harper offered no evidence of corruption. Counsel to Inquiry read out a list of evidence (as contained in Mr. Harper's own evidence) to back up Mr. Harper's claims.

Counsel to Inquiry went on to suggest the Panel might want to question the honesty of former Home Affairs Minister, and current Deputy, ANDREW LEWIS who has given a number of different accounts to different bodies which, on the face of it, can't all be true.

Perhaps one of the biggest stings (for the Establishment) was the closing statement made by the Chair Francis Oldham QC. The Chief Minister's Department, States of Jersey Police and the Law Offices' Department have all asked for a dialogue with the Inquiry before the publication of its final report. I believe the three parties (who are in effect under investigation by the Inquiry) want sight of the panel's final report 28 days before it is made public.

This twenty eight day window could (to those of us skeptics) give the Law Offices' Department/police/Chief Ministers Department the opportunity to launch legal proceedings/injunctions on the panel, or its report. Which could mean that it never sees the light of day, or at least would have been redacted the living daylights out of after going through the Law Office washing machine a few times a-la Napier/Wiltshire.

Thankfully Francis Oldham QC (below) sought to enforce the independence of the Inquiry/Panel and rebuff that/those requests and, it appears will not be having any dialogue with these Interested Parties. She will NOT be giving them the report 28 days before publication. She will NOT be sending out any Maxwellisation or Scott Letters to those who might be criticised in the final report. Those who have been criticised have had the opportunity to respond to that criticism already, Francis Oldham explains in the video.

Some much needed confidence was gained in the independence of this Inquiry as a result of the Chair's closing statement today.

The final report should be published by December this year.

Posted by voiceforchildren at 16:03 59 comments: Links to this post 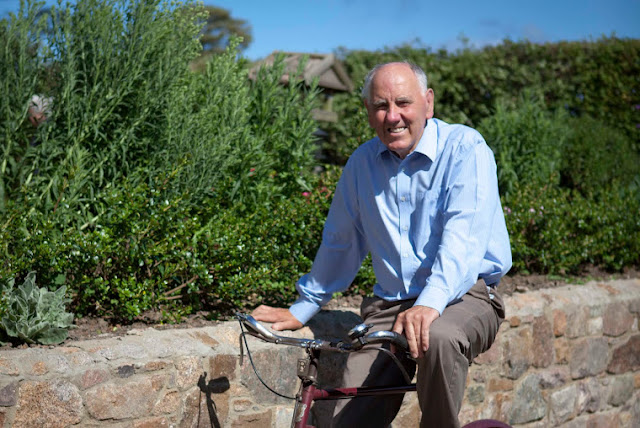 Regular readers will know that back in November 2015 Bob suffered a near fatal brain haemorrhage/stroke and was flown to Southhampton where, for a while, it looked touch and go, if he would survive the stroke, or make any kind of recovery. We reported on this HERE.

After 7/8 months of physiotherapy/speech therapy at Overdale Hospital Bob was able to return home today, something he has been very much looking forward to for quite some time now.

Throughout Bob's recuperation he has had solid support from his family, Alison and Catherine (his daughters) have been flying over regularly from the UK to be by his side and play a big part in his recovery. His wife Ann has (despite her own frailty from Multiple Sclerosis)  been a rock worthy of commendation, not least for organising their home conversion to accommodate Bob in his wheelchair so that he was able to return home as quickly as possible. Grandson Matthew has also been by his grandfather/mother's side throughout, whether it be visiting Bob at the hospital, or helping Ann out at their home with practical/manual support.

Watching the strength, and love, of Bob's family during this very difficult time has been both humbling and inspiring, and I am sure that strength and love has played a major part in Bob's recovery. Bob, and Ann, I know, are very proud of their family who are a huge testament to them.

Bob has a long way to go in his recovery as he is still paralysed down his right-hand-side and his speech has not yet come back as well as it could/will do. Bob's own determination has also been inspirational during his recovery and it's that determination, and his family support, that will get him back to his good old self. His "regime" of physio and speech therapy will continue now that he is at home where he will spend the next few days getting into a routine and familiarising himself with the new layout of the house and learning what he can/can't do and what he needs to learn to do in order to enjoy the new house as independently as he can.

The family have asked me to thank everybody for their support whether it be cards, phone-calls, visits, letters and positive social media comments. They have all been an inspiration and encouraging to Bob and the family.

Posted by voiceforchildren at 17:49 76 comments: Links to this post 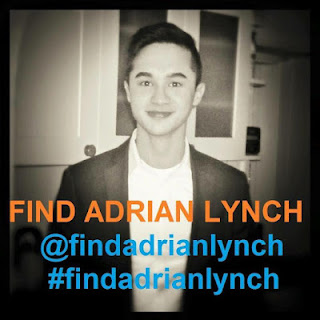 On the 4th/5th of December 2015 20-year-old Adrian Lynch went missing in Jersey after attending a work's party at the Merton Hotel. Six months later there is still no sign of Adrian despite efforts from the States of Jersey Police, the media, Adrian's parents, family and friends, making numerous appeals for people with any information to come forward.

Wednesday 1st June 2016 it was announced that an anonymous donor has, very generously, offered a £10,000 reward for anybody with information leading to Adrian being found. We understand that this has generated around half a dozen calls from the public to the police. It is unclear as to why the police themselves have/had not offered a reward sooner but we hope after the generosity of this member of the public, and the phone-calls to the police, it will yield some useful information in finding Adrian. 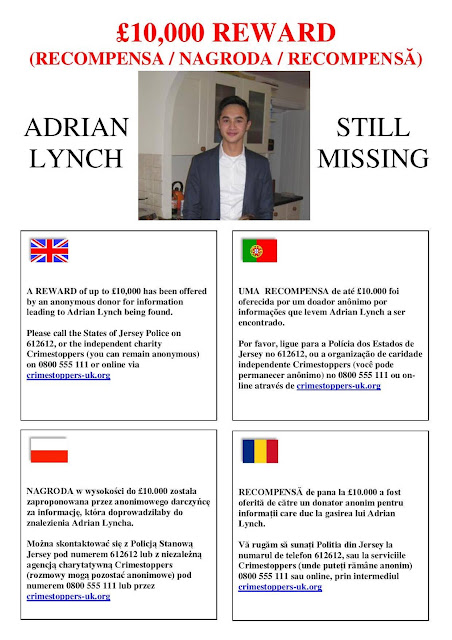 On the 18th May we published the latest timeline of Adrian's last known movements according to the States of Jersey Police. Although there are other theories/timelines which we will explore at a later date for the purpose of this posting we have, to the best of our ability, recreated (on video below) the latest official police version.

The States of Jersey Police, nor the media, (or anybody else to the best of our knowledge) have ever published any kind of a video reconstruction of Adrian's alleged last known movements. Maps of the area where Adrian was last seen, or walked, have been published, and as helpful as that is, if (like me) you are unfamiliar with the area, It's not quite as helpful as it could be.

With that in mind, Team Voice, who have walked the route Adrian is reported to have taken on a number of occasions, decided it would/could be helpful if we were to video the route (below) so people (who are unfamiliar with the area) could see for themselves those areas referred to on the maps published by the States of Jersey Police/Media.

We hope this might jog somebody's memory, people might recognise a road/lane/building that isn't apparent on the published maps, and be able to come forward with any information they might have.

Adrian Lynch Investigation. QUESTIONS TO THE STATES OF JERSEY POLICE.

Posted by voiceforchildren at 19:24 24 comments: Links to this post