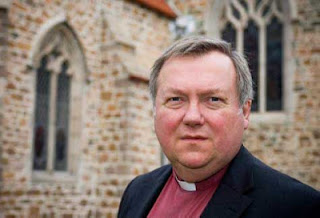 "THE VERY REVEREND ROBERT KEY, the Dean of Jersey, has today apologised for mistakes in the handling of a safeguarding complaint and added his own apology to that of the Bishop of Winchester and Archbishop of Canterbury to the vulnerable person at the heart of this matter.

He has confirmed that he shares the Bishop of Winchester’s and Archbishop of Canterbury’s stated commitment to safeguarding in the Diocese and the wider Church. The Dean was speaking following meetings with the Bishop last week.

The Bishop acknowledges that, although mistakes were made, the Dean believed he was acting in good faith. Following the commitment that the Dean has made, the Bishop has decided that he will issue a new Commission to the Dean with immediate effect. The Bishop and the Dean have also agreed that, in the light of these recent events, there are areas in Jersey Canon Law which would benefit from further review and they are committed to working together as necessary to revise them.

The Dean said: “I regret mistakes that I made in the safeguarding processes and I understand that, upon reflection, it would have been more helpful if I had co-operated more fully with the Korris Review. I now add my own apology to that of the Bishop of Winchester and Archbishop of Canterbury to the vulnerable person at the heart of this matter. I will be cooperating with the Visitation and Investigation announced by the Bishop on 26 March. Together, the Bishop and I are committed to the importance of safeguarding children and vulnerable adults in Jersey and to working to ensure the safeguarding procedures of the Diocese achieve this as part of the whole Church’s mission.”

The Bishop of Winchester, the Right Reverend Tim Dakin, said: “Safeguarding must always be of paramount concern and is a vital part of the Church’s mission. We will now press ahead with the Visitation and Investigation and see them through to their conclusions, as we all have important lessons to learn. At the heart of this matter is safeguarding the vulnerable who have frequently been let down by the Church. The Dean’s apology is a welcome one, and I am glad that he has joined with me in reaffirming our commitment to safeguarding. I am also glad that the Dean has promised his full cooperation with these inquiries. I wish to assure the Dean and the people of Jersey of my prayers as we go forward together.”(END)
So the Dean says sorry and everything is OK?

Posted by voiceforchildren at 10:12 73 comments: Links to this post

Most of us are aware of the "letter campaign" from the local church going lobby in support of Bob Key, the Dean of Jersey recently suspended by the Bishop of Winchester Tim Dakin.

The Dean's suspension came about, as regular readers will be aware, after a published Report criticising his failure to act in accordance with "safeguarding procedures."

We first reported on this Here and have kept readers up to date, as best we can, HERE and HERE

The welfare of alleged victim "HG" appears not to be a priority, or even an issue. Now the priority looks to be the restoration of the Dean to office and to resolve potential constitutional problems that are becoming apparent.

At the forefront of this complex puzzle is former Bailiff, and now Senator Philip Bailhache, who looks to have his finger in an awful lot of pies nowadays from Plemont through to the hijacking of Electoral Reform, independence for Jersey, and his own self promotion as Jersey's would-be Foreign Minister to name but a few.

The latest letter (below), sent by the Dean's lobbyists, calls for his reinstatement before Liberation Day (May the 9th) so he can appear in his full regalia and splendour.

Readers will note that part of the lobbyists e-mail (below) mentions an attachment where there is further support for the Dean's reinstatement. This support comes from a friend of the Dean's in Scotland who is a Minister in the Church of Scotland who, some years ago, campaigned against a gay preacher being appointed.

We have had site of this letter of support but we do not intend to publish it at this time but perhaps the lobbyists might consider doing so?

In response to all this lobbyists' activity, and letter campaign, I have today written my own letter/e-mail to the Bishop of Winchester concerning "HG" and "The Jersey Way" copied to the Lieutenant Governor.

Readers who share my concerns are invited to endorse my e-mail/letter to Bishop Dakin by using it as a template and sending it to bishop.tim@winchester.anglican.org copying in the Lieutenant Governor  governorsoffice@gov.je

If you, like others, wrote to the Bishop I doubt whether you have even had the courtesy of a reply. He seems determined to ignore us, the people of Jersey.

It seems Bob is suspended because he is an obstacle to the Bishop's plans and it has gone on long enough!

We need to contact our government and show them we support them in their efforts to get Bob reinstated at least in time for our Liberation Day celebrations.

It is extremely important that you write a short e-mail to that effect and send it to the following addresses:

P.S. I attach a letter sent to the Bishop by Rev'd. (name redacted) which gives a good perspective on the situation. I have his permission to circulate this to you.(END).

I am contacting you in order to offer my full support for your suspension of Bob Key, the Dean of Jersey, which I see as a neutral act. Further I would like to add my disgust at the letter sent to The Most Rev and Rt Hon the Lord Archbishop of Canterbury by Senator Philip Bailhache on the 26 of March 2013 in which the Senator displayed, what is known as "The Jersey Way." That is to say, in my opinion, he set out to discredit the investigation/report published by the Diocese of Winchester, and thus discrediting, not to mention, "attacking" the alleged Abuse Victim "HG."

You will no doubt be aware that Jersey has an appalling record when it comes to any kind of safeguarding issues and stands accused of covering up Child Abuse for decades.

In 2008 the States of Jersey Police went public with its investigation (operation Rectangle) into decades of institutional Child Abuse and the world's media flocked to the island in their masses and reported on the heinous atrocities committed in one of the Jersey's "care" homes Haut de la Garenne. The evidence uncovered, during this investigation, was nothing less than spine chilling, to include numerous child's remains uncovered, and according to official police reports, bones that were "fresh and fleshed", when they were "burnt and buried."

There has subsequently been a number of, what has been described as, "show trials" concerning some of the abuse which occurred at the home and some low level suspects were convicted in the island's Royal Court. According to the former Senior Investigating Officer of Operation Rectangle, Lenny Harper, there are still at least 4 "priority suspects" employed by the States of Jersey, in positions of power/authority, some with alarming access to children/vulnerable adults who were never taken to court by the then Attorney General William Bailhache, brother of Philip Bailhache. The Former Police Chief, Graham Power QPM, described the allegations the force were receiving as "State Sponsored Paedophilia."

It was after the word's media left the island that "The Jersey Way" came into play and the island's authorities set about discrediting the Child Abuse Investigation, the Investigators and by implication, the Abuse Victims/Survivors. Exactly what appears to be happening all over again as displayed in Senator Bailhache's letter to The Most Rev and Rt Hon the Lord Archbishop of Canterbury where, in my opinion, he attempts to portray the alleged victim (HG) as "the perpetrator" by writing "it was clearly considered by all concerned that that order was in the best interests both of HG and those she had abused."

This, in my opinion, is a disgusting remark to make and only serves to demonstrate that despite all the abuse Investigations/Reports whether it be Haut de la Garenne, Jimmy Savile, North Wales, Kincora, Magdalene Laundries and so on, "The Jersey Way" still prevails, attack the investigators and victim(s) while supporting the alleged abusers/wrong doers.

I'm aware that a number of Jersey's, so called, "Christians" along with Senator Bailhache, have been lobbying for, and supporting, Bob Key, yet none of the fine people, in the Jersey Church, have offered ANY public support for the most important person in this sorry saga and that is the alleged victim (HG).

This e-mail sets out to offer that support, moreover, it sets out my wish to distance myself from the views of Senator Bailhache and offer full support to your decisive and necessary action in suspending the Dean, as a neutral act, and hope that the visitation of the Right Reverend John Gladwin is able to take place without hindrance from the likes of Senator Bailhache and justice, along with the wellbeing of "HG", is seen as a priority.

Senator Bailhache's stance is doing neither him, nor the church, any favours whatsoever, and, in my opinion, further damages the reputation of Jersey, and by implication, the church's reputation on the international/world stage and is, in no way, a fair representation of anybody I have spoken to.

It should also be said that I have spoken to a number of people from the church, in Jersey, who have told me that they feel there is a bullying campaign going on to support the Dean and those who do support "HG" are in fear of repercussions if they publicly show their support.

My thoughts are with "HG." I leave you with a question that everybody should be asking themselves; "what would Jesus have done, would he, have  supported the poor, homeless, vulnerable, victim, or would he, like Senator Bailhache and others, have  defended those who allegedly wronged her?

Good luck to the Right Reverend John Gladwin with his visitation and good luck to anybody who comes up against "The Jersey Way" and not least good luck to "HG" and hope she is able to recover from her "Jersey Experience."

Posted by voiceforchildren at 12:22 53 comments: Links to this post