On Monday November the 2nd 11.30a.m Mr. William Bailhache will be taking an oath and will be sworn in as our Deputy Bailiff. He is of course our current Attorney General and brother of recently retired Bailiff Phillip Bailhache.

“Justice for Jersey” will be staging a rally from 10.30.a.m in the Royal Square to coincide with this farcical fancy dress charade with a fancy dress of their own.

Why would people want to turn up to this rally? William Bailhache’s 6 figure salary is paid for by the public purse, the tax payer. He is the Attorney General who failed to extradite, from France, (let alone convict) two alleged child abusers employed by the States of Jersey to “care” for children. He is also the AG who has dropped, somewhere in the region of EIGHTEEN alleged child abuse cases involving, we are led to believe, high ranking Civil Servants employed by the States of Jersey and still in post!!

This is a man who makes extremely political decisions, decides what is or isn’t in the public interest and what is best for the States of Jersey and is not answerable to the public who pay his wages, Which we are led to believe are in the region of £300,000 with a pension of around £120,000.

“Justice For Jersey” would like to invite anybody and everybody who have suffered an in-justice at the hands of our Judicial System, Education System, Health Service, Social Services, Planning Department to attend this Rally to show our Ruling elite enough is enough.

Team Voice whole heartedly support Justice For Jersey in their campaign to bring Jersey into the 21st century by calling for a fair and impartial Judicial System along with an open and transparent DEMOCRATIC government.

Justice For Jersey should also like to extend the Rally invitation to all supporters of Senator Syvret’s quest for justice and this includes ALL States members.

Senator Syvret has felt the full wrath of the Bailhache Brothers and the Civil Servants for attempting to hold the executive to account, deal with decades of abusive treatment of our most vulnerable children and attempted to bring some kind of justice for the victims of the Jersey “care” system.

For his troubles he has had his residence (illegally?) raided by a politicised Police Force on what has been described as a “fishing expedition” for the ruling elite in order to get any kind of dirt they can to shut him up. He has faced prosecution (in a Kangaroo Court) for attempting to expose a potential Serial Killer. It has been reported He was investigated by 2 police officers who’s sole duty it was to find some dirt on him
Inevitably he has been forced to flee the island for doing exactly what a politician is paid to do. That is to hold the executive to account and represent the people of Jersey in an open and transparent manner.

One must remember Senator Syvret has the widest mandate on the island, he is the longest serving Senator and father of the house. If what has been done to him by the Ruling Elite then what makes other States Members believe it can’t happen to them if they decide to speak out? And if all this can happen to ANY States member, then what chance does any member of the public stand of being heard?

Please support “Justice for Jersey” in this VITAL show of DISCONTENT that is growing among the ordinary folk of this once beautiful island. They will be meeting at 10.30.a.m on Monday the 2nd of November in the Royal Square. The “peaceful” Rally will start at 11.30. Some people will be turning up in Fancy Dress in order to highlight the charade that will be displayed by our “Great and Good” feel free to dress up if you like.

Submitted by Team Voice and Justice for Jersey.
Posted by voiceforchildren at 09:04 6 comments: Links to this post 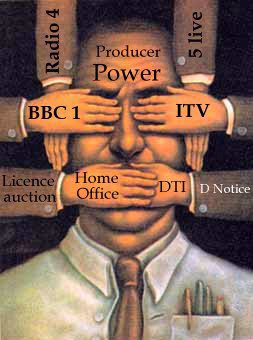 Apparently, so I am told by the above, there is no difference between BBC Jersey (Bridget Bullshit Corporation) and National BBC. So when they were reporting on Senator Syvret’s Legal Asylum case and claiming that the Senator declined to comment to the BBC - that was factually correct.

However it wasn’t strictly true. Senator Syvret had quite clearly stated that he would not comment to BBC Jersey but would talk with BBC London and when I phoned the Jersey “news”room to help them put the record straight in order to inform their listeners that much better, they were having none of it and insisted the BBC is the BBC and were not interested in telling their listeners the full facts.

This did not surprise me in the slightest, you see, I Know how the local BBC operate and in particular Chris Stone. Although I can’t say for sure if he is his own man or a mere Puppet for Denzil Dudley and Matthew Price.

Chris Stone does not allow me on his phone-in any longer. When I was allowed on - before I went on air I had to tell the producer “exactly” what I was going to say. I was told if I deviated in any way or criticised the local BBC in any way then I would be cut off.

I’ll not go on too much about my particular case but would like to concentrate on the bigger picture.

Have you ever noticed how he (Chris Stone) starts the phone-in most days? It is (in my opinion) “Agenda Setting“. He will say things like “scientists have discovered the smell of freshly cut grass is a stimulant, have you got a smell you want to talk about”? or “While on holiday I was stung on the foot by a wasp, have you ever been stung by a wasp”? If the main headline “news” is anything damming towards our government he doesn’t want to talk about it.

He will later be on his “Home Time” programme saying something like “ today’s phone-in was dominated by callers who wanted to talk about wasp stings” No sh1t Chris! I wonder why that is?

When the Attorney General decided not to prosecute two alleged child abusers who had moved to France it was their (Bridget Bullshit Corporation) headline “news” item. I phoned up to talk about it, was put through to the producer and was told “oh we’re not talking about that today” so I said “what…..we’re not allowed to talk about the top news story”? I was then told “no, the subject at the moment is poor quality tarmac on the roads”

These are just a couple of many examples how the phone-in is managed or should I say how public opinion is managed?

Nick Griffin was (a very controversial) guest on Question Time just recently broadcast by the BBC. Chris Stone, on the phone in, was quoting things like “I might not agree with what you have to say but I will defend your right to say it”……. Bullsh1t Chris you won’t even let an anti establishment caller on your radio show.

Then we get on to the “Talkback” programme (I’m prevented from going on there as well). One of the last things Senator Syvret did as the Minister for Health and Social Services was to commission a report by the Howard League for Penal Reform to look into how the States of Jersey “cared” for vulnerable children. Whistleblower Simon Bellwood was removed from his post at Greenfields after challenging the illegal and abusive methods employed up there against the children. Senator Syvret subsequently was driven out of his post as H&SS Minister.

The report completed by the HLFPR was totally damming to our States of Jersey and in my opinion vindicated Senator Syvret and Simon Bellwood. There was MASSIVE support for Senator Syvret, and others, to be guests on the Talkback programme (and still is) The Bridget Bullsh1t Corporation have refused this from the outset. Senator Syvret is an Opposition Politician who upsets the status quo and it appears this does not fit with their agenda. Perhaps he should get stung by a wasp! That might get him on the show.

As I have done all that I can to contribute to the phone-ins and been denied a voice by Chris Stone, before I am forced to “doorstep” him I am publicly requesting an interview. If he refuses to allow me on his show then perhaps he would like to come onto mine. If it is the case that he is merely a puppet for Denzil Dudley and Matthew Price then the request for an interview extends to them also.

Thanks to the internet, not only the Bridget Bullsh1t Corporation, but our entire local media are slowly getting exposed for years of cut and paste “journalism” and opinion management. How long can it continue?
Posted by voiceforchildren at 09:20 20 comments: Links to this post

Email ThisBlogThis!Share to TwitterShare to FacebookShare to Pinterest
Labels: BBC 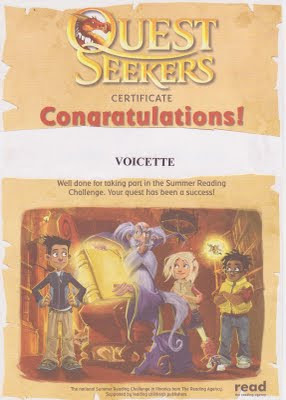 During the summer holidays my nine year old daughter (Voicette) took part in “Quest Seekers”. A scheme where you read 6 books from the library and describe the story satisfactorily to the Quest Seekers member then you are awarded a medal and a certificate.
I am very pleased to say she successfully completed her mission and received the medal and certificate yesterday.

The dilemma was, what 6 books do we choose to read?. Had this been a few years ago I would have liked her to have read something along the lines of Little Red Riding Hood, Goldilocks and the Three Bears, Snow White and the Seven Dwarfs.

A little while ago I got a massive wake up call as to how our government operates and was left no choice other than to “warn” or “alert” my children to the dangers they face because of our government. The said books therefore were not in the running.

As a small part of warning or alerting my children, I took my daughter to the States one day, I think it was the day of the Air Display this year. Although she knew some of the Politicians on a first name basis she didn’t know a vast majority of them or what they do.

I explained to her that I believe a vast majority of them are complicit in the cover-up of child abuse, she asked “which ones”? I pointed to the elected and un-elected members and told her their names. She asked “is someone paying them to cover up for child abuse”? to which I said “yes, about £44k by the people they are supposed to represent and considerably more for some of the un-elected members”.

I went on to point out and name the “good guys” and the “bad guys”, the Senators, Ministers, Constables and deputies. I tried, as best I could, to explain what they do, and how 10 out of the 12 Constables are only there to do, and vote, what they are told by the Council of Ministers.

It was not that long ago when I never knew who our Politicians were, or what they did, but I was propelled into this very dark and sordid world involuntarily and as they say “we are where we are”.

Our elected members and their Civil Servants have a lot to answer for, including my daughter’s view on Politicians and government.

So back to the books we chose and she enjoyed immensely. They were “Mother Theresa”, “Guy (Guido) Fawkes”, “Dr Martin Luther King Junior” “Mahatma Gandhi” “Nelson Mandela” and “Rosa Parks”.

Congratulations to my very articulate and beautiful little girl for achieving this certificate and medal. Shame on you elected members and Civil Servants (you know who you are) for influencing our choice of reading.
Posted by voiceforchildren at 09:31 8 comments: Links to this post