#Panodrama - An Exposé of the Fake News BBC! 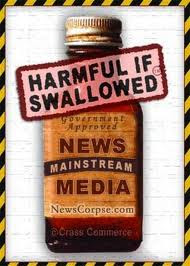 This is a must watch video/documentary of how the "elite" BBC and mainstream media conduct their business. It (the documentary) will come as no surprise to those who have been reading the local Jersey Blogs since 2007/8 during Operation Rectangle and the trashing of the names (by the MSM and Establishment) of those who have tried to protect children in Jersey.

The documentary appears to expose homophobia, racism, elitism, bias, classism, blackmail (and much more) by the BBC and its associates.

You won't have seen, or be seeing, this documentary in the mainstream media and after you have watched it you will know why.


Posted by voiceforchildren at 07:18 186 comments: Links to this post 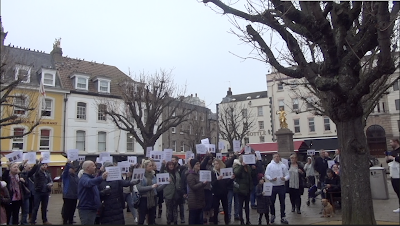 Today a rally took place in the Royal Square, organised by anti Child Abuse Campaigner Cheyenne O'Connor asking for pedophiles to remain on the sex offenders register for life and for a minimum sentence of three years imprisonment to be imposed on those who are convicted as highlighted in our PREVIOUS POSITING

Around 150-200 people turned up to support the cause which considering the subject matter, and the culture of fear still so prevalent on the island, this must be seen as a success and full credit to Cheyenne O'Conor for organising the event and to those who turned up.

There were two speakers at the event, the first was a very brave Survivor of Abuse Emma, who spoke of the ongoing physical and emotional scars and how this is also felt by family members long after the abuse occurred.

The second speaker was former Health Minister and whistleblower Stuart Syvret. Stuart spoke of events that took place in late 2007-2008 when he spoke out about the child abuse and the hostility he faced then, and now, for doing so. How the Jersey situation now is no better, if not worse, than it was back then. He also gave us a sobering reminder that not all those who were in the "care" of the States of Jersey made it out alive and deserve as much thought and recognition as those who did. Some say those who didn't make it out alive are the lucky ones................................

Below is a short video of today's events/speeches. Possibly more (video) to follow.

Posted by voiceforchildren at 17:49 47 comments: Links to this post 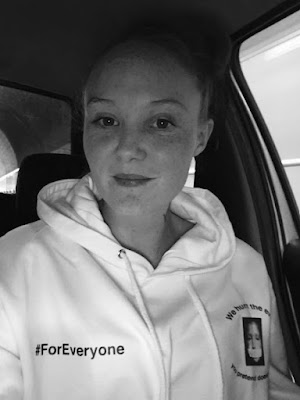 This coming Saturday 16th February at 10am there is a rally to be held at the Royal Square in Jersey. The rally has been organised by online pedophile hunter Cheyenne O'Connor who snares online child predators who attempt to meet (what they believe are) children. Cheyenne poses as a teenage child online and gathers evidence against pedophiles which she then hands over to the police. Her efforts have resulted in a number of convictions with some predators ending up in prison, for what she, and many others believe, a short amount of time.

Cheyenne is advocating for a minimum (three year) prison sentence of pedophiles and believes they should remain on the Sex Offenders Register for life and has created an online petition to that end. The petition has attracted more than 2,500 signatures and received a response from the relative (Home Affairs) Minister. With another 2,500 signatures it will be considered for debate in the Island's Parliament. The petition (and the Minister's response) can be viewed (and signed) HERE. She also runs her own Facebook page where she documents her online work catching pedophiles and cases she is working on. The page can be viewed HERE. 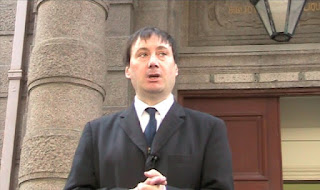 VFC spoke with Cheyenne yesterday (video below) and discussed the upcoming rally this Saturday where there will be a few speakers including Survivors and former Health Minister, and whistleblower Stuart Syvret. We also discussed such topics as "The Culture of Fear" so prevalent in our Island, the message being sent out by those attacking those of us who campaign against pedophilia and trying to protect our children. Her response the the Home Affairs Minister's and Attorney General's response, Keyboard Warriors and much more.

We thank Cheyenne O'Connor for the interview and for the work she does in trying to keep our children safe. If you agree with the PETITION and want to make a difference then sign it and be at the rally this Saturday 16th February 10am Royal Square.

Posted by voiceforchildren at 16:58 44 comments: Links to this post