None of the Above?

Just as around thirty percent of the island's electorate are, I am taking an interest in the up-coming election, and wondering where to put my X on the Ballot Paper in particular for the Senatorial contest.

It's that time of year, that happens every four years, where the people who are potentially going to be ruling over us for the next political term are all lining up telling us how they are going to make our lives better and sort out all the ills that have plagued local politics since before time begun! Of course it's election time.

I'm not sure how readers feel but - being as long in the tooth as I am - I've pretty much heard, or seen, it all before when it comes to election promises and election campaigns and nothing really ever changes. That's because nothing can change. Candidates (or at least some) go into politics with the best intentions and they are either silenced by having the attractive offer of immediate promotion to Minister/Assistant Minister or silenced by being relegated to the Backbench/Scrutiny where you are silenced by being in the minority. Portrayed by a complicit media as a "Trouble Maker" if you try to rock the boat and ask uncomfortable questions. Nonetheless it hasn't (yet) deterred me from voting although I can see that point being reached for the 2022 elections! 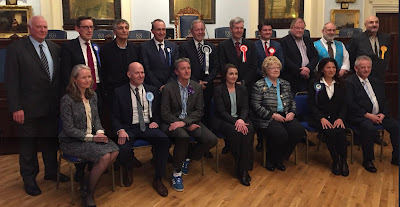 After many discussions with people who follow (but don't necessarily vote in) the elections I was minded (and did) e-mail the 17 Senatorial Candidates with a question, that pops up at every election, about a "None of the Above" box on the Ballot paper...............Or not.

I was wondering how readers feel about it and in particular readers who don't vote. If there was a None of the Above box that you could tick - would that entice you to exercise your right and vote? With such a large voter abstention (around 70%) would this option bring more voters out? If not why don't you vote? What would encourage you to vote? Would Party Politics, rather than the complete mess we've got now, bring you to the Ballot Box? Having equal sized constituencies? One type of States Member rather than three?

It could be encouraging to some extent that a number of existing States Members are not standing for re-election including some Ministers and I have not noticed too many tears being shed for their impending absence. In the past our parliament has too often resembled a day-centre for elderly Jersey-folk.

Whatever your political inclinations the election will provide at least some voters ( particularly in the Deputies elections) the opportunity to bring the island's government/parliament a degree of youth and diversity which it has often lacked in the past.

Anyhow, as mentioned above, I have sent the below e-mail to the 17 Senatorial Candidates and will look to publish their answers (if/when I get them) in due course.

After speaking with a large number of people, across the political divide, there seems to be a recurring theme as to why a number of them don’t vote and can’t be convinced to vote in the up-coming election.

The reasons vary as to why they will not engage in the Electoral Process ranging from the system being broken and their vote/voice doesn’t count. The most recurring theme is that they don’t see anybody, standing for election, worthy of their vote and if there was a “none of the above” option on the Ballot Paper then they would go to the Polling Station and tick that particular box.

For my own position I do, and will be voting, in this election.

Some of you will know me and have granted me interviews for my Blog (link below) in the past and will know that I predominantly campaign for Victims and Survivors of Child Abuse. I also commentate, or write about, political issues that aren’t always related to that particular subject and this is one of those times.

Although there are many other questions I will be looking to be answered before casting my vote I thought this/these question(s) could stimulate political involvement/discussion by publishing it (and possibly your answer(s)) on my Blog.

Every election time we hear all kinds of “guesses” and “speculation” as to why the majority of the population will not engage with the electoral process and why there is somewhere in the region of a 70% voter abstention. The “guesses” and “speculation” are pretty much the same at every election. “People are happy with their lot.” “If it ain’t broke don’t fix it” and many more including the one’s above.

I want to end these speculations and guesses and in order to do that I would support a “None of the Above” box on the Ballot paper. At the very least this option will show us if the electorate is “happy with its lot” or not. It would also open up the voting system for more people which I’m sure you would all agree can only be a positive?

I’d like to ask you, as candidates: 1). would you support, or not, a “None of the Above” box on the Ballot Paper?

3). If you DO support a “None of the Above” option and are elected/re-elected. Would you bring a proposition to the States to have it included on the Ballot Paper?"(END)