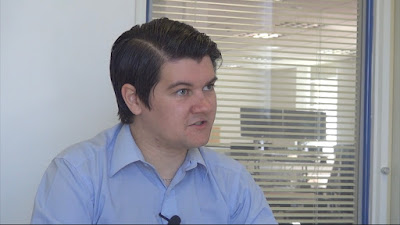 On Monday 1st July 2019 the government announced its REDRESS SCHEME for Survivors of the brutal regime suffered during their time at Les Chenes Secure Residential Unit and for those in a Jersey Foster Care Placement.

From the get-go parts (but not all) of the Old Media were (and still are) reporting the Redress Scheme as "Justice" for the Survivors. It would be interesting to learn how many Survivors the Old Media have spoken with who believe what they are(n't) getting is "justice." Certainly the ones I have spoken with see it as the only option available to them. Their abusers are NOT going to face charges so they (Survivors) have to make do (for the most part) with a couple of quid.

After the public announcement at St. Paul's Centre (Monday 1st July) VFC was granted an interview with Children's Minister Senator Sam Mezec. We took away the governments (and parts of the Old Media) agenda as passing this scheme off as "justice." Instead of declaring money (and an apology) is being offered to Survivors wouldn't it have been a better declaration to make that their abusers have been jailed AND the Survivors have been "adequately" compensated?

We asked the Children's Minister questions along those lines. "Why is this all about money and not justice?" "How can a price be put on a childhood/lifetime of misery and torment?" How on earth did the conflicted, and untrusted, Law Offices Department/Attorney General's Office get to be the Administrators of the Redress Scheme? The very people who have failed the Survivors for failing/refusing to prosecute (and allegedly protecting) their abusers. Staggeringly the Children's Minister told us that some Survivors asked for the option to have the Law Offices Department administer the scheme. The Minister, through the Lawyer representing many of the Survivors, says that partly for the simplicity of it and partly for the COST some survivors chose the Law Offices. Really? The Survivors voluntarily chose to make things as simple and cheap for the government without being pushed down that avenue? They weren't told that if we put the administration of the scheme out to tender then that could take a lot more time and your ordeal could drag on, unnecessarily, a lot longer? We asked, alongside the governments apology, shouldn't there be an apology from The Law Offices Department/Attorney General's Office? We know that the AG's Office has some (many) uncomfortable questions to ANSWER.

It is two years to the day that the Independent Jersey Care INQUIRY published its REPORT and RECOMMENDATIONS and one has to ask; "has attitudes towards Child Abuse, and Survivors, changed in any way?" "How is money perceived (by the government and parts of the Old Media) as "justice?" As mentioned above, and in the interview (below), those Survivors I have spoken with have ALL said this is/was never about money, it's always been about justice. It's the government (along with The Law Offices Department) who have made it about money, it is not the choice of all Survivors. Their choice would have been not to have been abused in the first place.