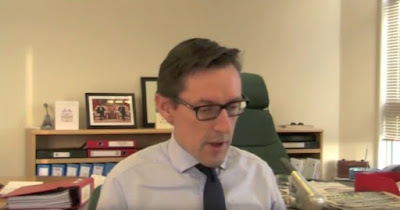 Jersey's Chief Minister, Senator Ian Gorst, has declared his intention to put himself, once more, before the electorate and seek a third, and final term, as Chief Minister.

Last week VFC was granted an interview (video below) with Senator Gorst to discuss his decision/reasons for seeking an unprecedented third term as the head of the island's government. As an anti Child abuse campaigner I wanted to know how much his support for the Jersey Independent Care Inquiry, and its recommendations, might have hurt him politically, how can he appeal to reformers and traditionalists at the same time? How can he make the public, and States Members, aware of the atrocities which took place (for decades) in State-run "Care" Institutions when some people (and media) only want to discredit the Care Inquiry, and its panel, for ordering a Prawn Cocktail rather than the soup of the day (a-la Operation Rectangle)? 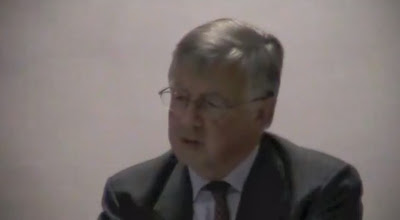 We discuss (among much more) the possibility of (long time critic of the Care Inquiry) Senator Philip Bailhache challenging the leadership role, either openly, or by proxy and what this could mean to the implementation (or not) of the Care Inquiry's recommendations should Senator Bailhache, or a proxy, be successful?

The way I see the up-coming contest for Chief Minister is a two-horse-race. It's either Senator Gorst or Senator Bailhache in the running. Who we elect, at the General Election in May this year, will decide who leads Jersey for the next four years. Who is committed to implementing the Care Inquiry's recommendations? Who is committed to reforming the States and bringing it somewhere close to the 21st Century? Who favours "The Jersey Way" and would take the Island back to the 15th Century?

Gorst has come in for a lot of criticism over his leadership across Social Media. One doesn't have to look far on the internet to see remarks like "get Gorst out" "Gorst is useless" "wait until the next election Gorst will be history." This is all well and good but I don't see anybody saying who he will be replaced by? So far the only other declared candidate is Senator Lyndon (Philip Bailhache by proxy) Farnham. With his track record of the Jersey Innovation fund, the Aircraft (non) registry, Condor, and so forth is he really the man to replace Gorst?

Would Senator Gorst be my first choice for Chief Minister? No. But one has to be realistic and look at the "realistic" alternative(s).

Of course this all does depend on either/both Senators Gorst and Bailhache being re-elected in May and unless there's a huge (monumental) shift in the demographic of the voter (traditional Jersey) I think it is a forgone conclusion that both will get back in comfortably.

Hopefully readers/voters/perspective voters will find the video interview below informative and might encourage them to the polls at the General Election. Vote.je is a very useful site which explains how to get registered to vote and much more which can be found, on the left hand side of this Blogsite under the "My Blog List" banner or  it can be accessed from HERE.

Jersey's only Political Party - Reform Jersey - has issued the below Press Release.The Party would also like to invite members of the public to a Seminar being held at the Jersey Opera House this Saturday 10th March 6pm until 8pm. The Seminar is to mark International Women's Day where two guest speakers - Dr Rupa Huq and  Lesley Mansell - will be sharing their political and life experiences.  More information can be found HERE.

Reform Jersey is pleased to announce that two ‘Equality Officers’ have been elected as part of its management team.

Graca Ramos and Edyta Buard will act as joint-chairs with special oversight for such matters as diversity, equality and community outreach both within the party organisation and in policy making, in general.

In the run up to the election, they will be working with the management team to engage particularly with female voters, Portuguese and Polish residents and other nationals. They will also support candidates in their campaigns within this groups.

Speaking for the Party, Mrs Buard said, “It is important that the States Assembly should more actively reflect the diversity that is present the wider community. Reform Jersey, too, recognise that diversity within the party activists and management is also vital for good policy making and for effective outreach.”

Ms Ramos said that Reform Jersey had actively been seeking to recruit female candidates and dual nationals, who could ‘speak the language’ of the community they would represent, both figuratively and literally. ‘Engaging the non-native Jersey population in Jersey has, for a long time, been a problem. The Portuguese community is no different. I believe that when the first Portuguese candidate is elected, it will be a milestone for Jersey politics and that should really help engage many Portuguese who may never have previously voted in Jersey.’

Party Chairman, Deputy Sam Mézec, said that he was delighted to have Ms Ramos and Mrs Buard as part of the team. ‘They are both very talented and compassionate individuals, who have been doing much good work in the community, professionally and as volunteers.’

He also said that the Party had recently endorsed 12 candidates at its recent management team meeting, and that the slate was very diverse both in terms of expertise and background. ‘We have 5 female candidates, young candidates, retired professionals, all with a wealth of soft and hard skills. I am looking forward to campaigning together with such a great group of people. I think this election has the potential to surprise many people and deliver the positive change in politics that the island needs.’(ENDS)

Posted by voiceforchildren at 16:03 45 comments: