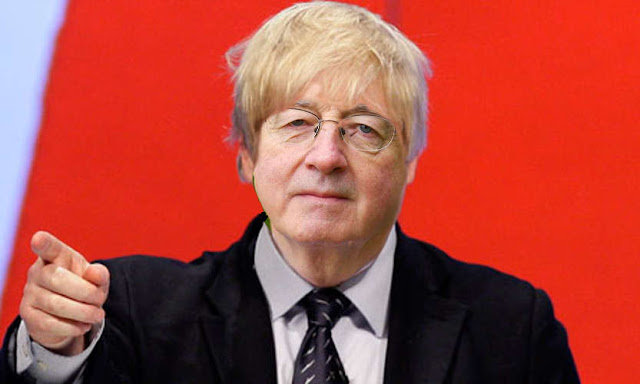 Political observers cannot help but have noticed that the national mainstream media have recently been (almost wall to wall) covering stories regarding the calls for the sacking/resignation of Boris Johnson. The calls are being made, seemingly, because he has gone "off message," is "ignoring collective responsibility" and "undermining the authority" of his Prime Minster Theresa May regarding Brexit.

Boris Johnson, it is firmly believed, is setting his stall for a leadership challenge against Theresa May by undermining her authority with his publicly made Brexit views and is making the PM into some kind of a laughing stock because she is unwilling, or unable, to reign her foreign Minister in.

But what about the Jersey situation with our Foreign Minister, Senator Philip (Boris) Bailhache, and leader Senator, Ian Abraham ,  (Theresa) Gorst? Senator Bailhache and his constant undermining of Ian Gorst, and the latter's attempts, not only to have a Committee of Inquiry (COI) into decades of Child Abuse, but to implement its recommendations. Not only has Boris Bailhache consistently attempted to derail the COI but is now attempting to derail senator Gorst and his attempts to implement the recommendation of splitting the dual role of the Bailiff. Senator Bailhache playing (as mentioned below) the old "tradition" card. Although he didn't play that card when he wiped out 500 years of tradition with the church. That obviously wasn't "traditional" enough to worry the public with.

While drafting this Blog Posting I was contacted by a reader and asked if I could/would publish a Guest Posting which, coincidentally, mirrored some of the points I was going to make so have incorporated it. Thankfully the reader HAS seen the similarities/comparisons between the Theresa May/Boris Johnson, Ian Gorst/Philip Bailhache sketch but can it be that not ONE of our esteemed professional local journalists have seen these similarities/comparisons? Do they not watch the national news?

Readers might recall that Sir Philip, with the help of ITV/CTV, managed to EXONERATE the then Jersey Dean Bob Key.

The Guest Poster has asked to remain anonymous.

"They say that States Members start behaving strangely a few months before an election - some, who have otherwise been inconspicuous for the past 3 years have even been heard to speak, ask questions and even be critical of Government policy. When you are on a sinking ship, even the most loyal crew member will start eyeing up the life-rafts, knowing there may not be space for everyone.

This is standard practice, but what is going to be different about the May elections is that, for the first time in recent time, the fracture lines are starting to show - and in unusual places. Namely, there is infighting on the right. We saw the early signs of this in the fall-out over the innovation fund. Clearly, it was mismanaged. And whilst in times of success, various Ministers would line up to claim the positives as their own, or to take part in the traditional patting of each other's backs, this time, the knives came out.
The public wanted a scalp. The highly paid civil servants were shrewd enough to leave the scene (and the island) before the 'vraic hit the fields', and they would have been laughing all the way to the bank.

Rightly or wrongly, Senator Ozouf was the one in the firing line for the failings of the fund and he had to go. The Chief Minister, on the other hand, strongly suggested that it was not his friend Philip who was to blame, so much as Senators Maclean and Farnham - the traditional right-wing of his council of Minister.

Skip forward a few months, and we see another prominent, canny politician who is fully aware that this Council of Minister's ship is heading firmly for the electoral rocks. The English-man Gorst and Phil'll Fix it have never been so unpopular. With the rise of Reform Jersey, and the decline of the neo-liberals, it is important that Senator Bailhache not only has a life raft (chauffeur-driven no doubt), but a ship of his own to captain when SS Vanity finally goes under. For that he needs a flag and a crew.

The 'flag' is tradition and the cause is the Bailiff. An uninspiring one, you might say and this is where the spin is needed. Remember the 2014 elections, which instead of being dominated by the real political issues and the Council of Ministers being held to account for their failings in Health, Housing, Social Security, electoral reform and Population control, the election was engineered to be little more than a side show about the Constables. Whilst younger people, unimpressed, showed their contempt for the political class by staying at home, the older voters took the bait - swallowing the hook, line and sinker too - believing that parish rates would go up if the constables were not in the States. The right (traditional and business class) were united in their efforts then, and saw off the unaligned independents, whilst the Social Democrats of Reform Jersey made no net gains, but maintained their seats.

This time it is very different. The rift between Gorst/Ozouf on the one hand, the 'progressive'-conservatives on one hand and the feudal-reactionaries on the other is palpable. Philip Bailhache, who never was one to toe the line (on the Child Abuse Inquiry, notably) has sensed the public mood and is making the separation of powers debate about something it is not. He knows it is a very simple matter - that Courts and Legislatures should be separate, and that Judges should stick to judging and politicians to politicking. So he needs a distraction and a bogey-man.

And the Jersey media go along with it.

In the recent Channel TV interview, (below) which was cloying in its deference to 'Sir' Philip, the story ran - Jersey could elect its own speaker like in the UK. But of course, it could have said 'like Barbados', 'like the Cayman Islands' or - how's about - 'like France.'

If there is an obvious parallel to be made with the UK it is the sharpening of knives from the likes of Boris Johnson and the would be pretenders for the lame-duck Theresa May's job.

Surely I am not the only one to see the comparison between Sir Philip Johnson and Boris Bailhache (with a little bit of Rees-Mogg thrown in for good measure)?"(END)