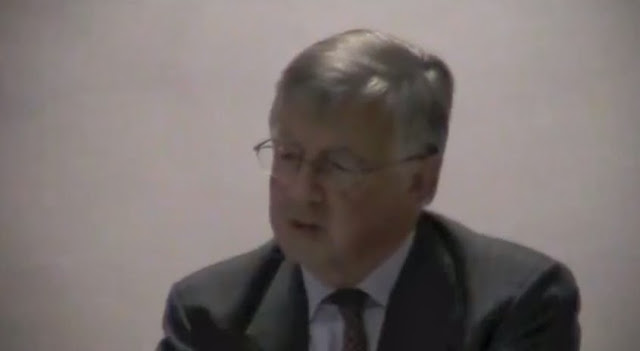 In our PREVIOUS POSTING we warned readers/politicians to be "careful what (who) you wish for" concerning the Vote of No Confidence against Chief Minister Senator Ian Gorst. A vote that he comfortably survived.

Our concerns, as Anti Child Abuse Campaigners, were that if Senator Gorst (who is a supporter of the Child Abuse Committee of Inquiry) was ousted then we could almost certainly end up with Senator Bailhache as Chief Minister. As pointed out in our previous posting (above link) Senator Bailhache is NOT a supporter of this Inquiry and has attempted to thwart it at any given opportunity. We believe that if he had become Chief Minister the COI report would not have seen the light of day. (It still might not)

At this point it should be of interest to readers to note that during the Vote of No Confidence debate Senator Bailhache did NOT speak. He had nothing to say, either in support of his Chief Minister, or otherwise. Could it be that he didn't want to show his hand and reveal that he was after the top job?

The very next day after Senator Gorst was voted to remain as Chief Minister and Senator Bailhache realised that he's not getting the top job just yet. During "arrangement of public business" he (Senator Bailhache) proposed that the in-committee debate to discuss the findings of the Child Abuse Inquiry's report should be deferred. It is due to be debated on the sixth, and if needs be, the seventh of July. He wanted it deferred until the tenth of July. His reasons, apparently, is to give members time to read and digest the report because three days aren't long enough.

We reproduce below the video of Senator Bailhache's short speech making the proposition to have the debate deferred. We ask readers, in spite of the revelations in our previous posting, where we reported that the Senator, while in his role as Bailiff, delivered a now "infamous" speech at a Liberation Day ceremony where he said words to the effect: "Child Abuse is a scandal but the real scandal is the denigration of Jersey and its people by the outside media." When asked by Council to the Inquiry if he had considered the effect this might have on Abuse Victims/Survivors he replied in the negative.

We ask readers (after watching the video below) has Senator Bailhache learnt anything since then? How much compassion for Victims/Survivors does he demonstrate in his reasoning for deferring the debate?

But here is one of the more curious aspects of his proposition. He wanted the debate deferred until the tenth of July. But as Senator Gorst pointed out in his speech (below) during the debate, and indeed another States Member pointed out in their speech, Senator Bailhache is due to be off-island on the tenth of July on what sounds like official States Business (Jersey-London Day). Despite being reminded of this by two States Members during the debate, the Senator did NOT acknowledge it in his summing up speech.

It could be that he completely forgot that he would be off-island on the tenth, and he completely forgot to acknowledge this despite being reminded by two States Members during the debate and did NOT address the issue in his summing up speech. In his defence we must say that the Senator's evidence to the Committee of Inquiry did demonstrate he has a woefully inadequate memory. Under questioning from Council to the Inquiry he could barely remember a thing and was unable to answer many questions.

It could also mean that he fears he is (rightly) going to be heavily criticised in the Inquiry's report and doesn't want to be around when it is being debated?

Readers should compare and contrast the speech of Chief Minister Gorst against that of Senator Bailhache and ask who considers the interests of the Victims and Survivors and who doesn't?


Posted by voiceforchildren at 08:00