Jersey Dean Who Exonerated him? 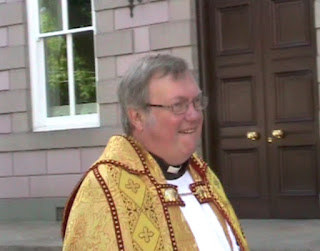 Senator Philip Bailhache has published a Press Release claiming that the Dame Heather Steel Report has exonerated the Dean of Jersey and the Jersey Clergy. Yet in the same Press Release he criticises Bishop Tim Dakin for not publishing the (unfinished) Steel Report.

This begs the question how does Philip Bailhache know the Steel Report exonerates (or otherwise) ANYBODY when it is unfinished and he's complaining it is unpublished? Nobody is supposed to have seen this Report yet Philip Bailhache claims to know what's in it?

Naturally parts of the local State Media have given Senator Bailhache the platform he was looking for in order to peddle his Press Release totally unchallenged and not least by ITV Channel Television where the Senator was interviewed on last night's 6pm "news" programme and was not asked the most obvious question(s) (surprise surprise) WHERE DOES THE STEEL REPORT SAY ANYBODY HAS BEEN "EXONERATED"/HOW DO YOU KNOW WHAT IT SAYS IF YOU HAVEN'T SEEN IT?

I e-mailed ITV Channel Television and asked them;

"On tonight's edition of your 6pm news programme Senator Philip Bailhache was interviewed by Mark McQuillan concerning the Dame Heather Steel Report. On a number of occasions Mr. McQuillan, and Senator Bailhache, stated that the Report had exonerated the Jersey Dean/Clergy.

Could I ask what Report Mr. McQuillan, and Senator Bailhache, were referring to? It clearly can't be the un-finished Dame Heather Report because that hasn't been published.

Below is Senator Bailhache's Press Release that makes no mention of the alleged Abuse Victim "HG", who he has, in a previous letter to the Archbishop of Canterbury, labelled this Abuse Victim as the Abuser, the letter can be read HERE.

"I am delighted that the Dean and his clergy have been exonerated by the Steel report but appalled by the Bishop of Winchester’s expressed intention to suppress its publication on what appear to be very specious grounds. The Bishop agreed with the Bailiff and the Dean that he would pass copies of the report to them, and he should honour that promise.

He asserts that he has given an undertaking not to release the report after representations from an interested person. As it is clear that the report makes no criticism of the Dean or clergy in Jersey, the only people who might be concerned about criticism in the report are those in or near the entourage of the Bishop. The unidentified interested party is either the person who made the original report which wrongly impugned the Dean, or a member of the Bishop’s staff. As Ms Korris’s report was published without its even being shown to the Dean, there can be no justification for acceding to any representation from her. As to the Bishop’s staff, it would be outrageous for the Bishop to protect them at the expense of Jersey’s reputation for safeguarding, and a full explanation of why the Dean has been exonerated. The Dean and the clergy are entitled to the publication of the complete Steel report so that their reputations can be fully restored in the eyes of the public.

The Bishop asserts that “questions remain about safeguarding best practice …”. Dame Heather Steel was charged to investigate whether there was any failure to “act in accordance with the Diocesan Safeguarding Procedure”.  We are all entitled to know her conclusions on that issue were. The Bishop should act in accordance with paragraph 10 of the Terms of Reference that he issued, and deliver a copy of the final report to the Bailiff and Dean as soon as he has received it."(END)

How does Senator Bailhache know  "it is clear that the report makes no criticism of the Dean or clergy in Jersey?" How can he be "delighted that the Dean and his clergy have been exonerated by the Steel report?" when in the same Press Release he complains "Dame Heather Steel was charged to investigate whether there was any failure to “act in accordance with the Diocesan Safeguarding Procedure”.  We are all entitled to know her conclusions on that issue were." The Senator seems to know that everybody in Jersey has been exonerated, how-come he doesn't know the conclusion the safeguarding issue?

This Press Release, in my opinion, was a (not so) carefully orchestrated piece of spin to artificially restore the reputation of the Dean/Clergy and Jersey. Published with the full knowledge that the State Media will not question/challenge him or it......As seen on ITV Cannel Television last night.

If the Dean has been "exonerated" then why did he APOLOGISE and why wasn't that question asked of Philip Bailhache on State Media last night?

Yet possibly one of the most "laughable?" sentence's in the Press Release has got to be this: "As to the Bishop’s staff, it would be outrageous for the Bishop to protect them at the expense of Jersey’s reputation for safeguarding" JERSEY'S REPUTATION FOR SAFEGUARDING? IS HE FOR REAL? Yet he wasn't questioned on this either.

Posted by voiceforchildren at 06:30