Blogging In Jersey Could Be Bad For Your Health. 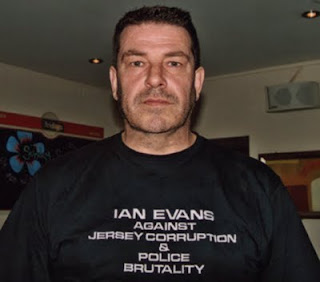 Prolific local Blogger and campaigner for justice IAN EVANS, two days ago, at the age of 48 suffered a Heart Attack and will now be laying in a hospital in Oxford.

Ian has fought against, what a growing number of people believe to be, a corrupt and politicised Judicial System here in Jersey for some 17 years or so now. Last Friday 30th March 2011 he took a bad turn at work, got himself to the Hospital, where it turns out, he has suffered a Heart Attack.

We were able to get an interview with Ian today in the Jersey General Hospital before he was due to be flown out to Oxford an hour or so later. In the interview we discuss his recent arrest and its similarities to the arrest of Former Health Minister Stuart Syvret. We discuss the alleged doctoring of trial tapes, how a supposed flood allegedly destroyed evidence that might have proven Ian's case against the Jersey Regime.

It can't be said that all the claimed intimidation and oppression that Ian has said to have suffered at the hands of "The Jersey Way" is fully responsible for his Heart Attack but one would be foolish to believe it has not been a contributory factor. Why did the police arrest him weeks after the alleged offence of contempt of court instead of asking him to go down to the Police Station? Why after more than three weeks of his house being searched will the police not give him back his phone, or sim-card that he relies on for his livelihood? What does "not in the public interest" mean? Again we are left with more questions than answers. Have we got a politicised police force and Judicial System? Is our government going to wear down and crush those who question them? Should the UK intervene and restore good governance and the rule of law in Jersey?

Ian vows to fight on......Is this a wise decision or should all us Jersey Bloggers who want a fit for purpose government, media or a Judicial System that is their to protect us rather than oppress us give up now before we find ourselves laying in a Hospital bed, or even worse, a slab in the Morgue?

Posted by voiceforchildren at 19:37