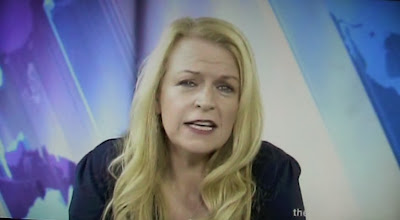 Further to a previous VFC Blog Posting demonstrating how State Television is able to EXONERATE THE DEAN OF JERSEY , on the strength of a Press Release from Senator Philip Bailhache, and a cosy chat in the "news" studio but contrary to the English language/dictionary/documented evidence. Not to mention the Dean's own APOLOGY.

As well as State Radio CUTTING OFF THE MICROPHONE of an opposition politician and refusing to give her the opportunity to provide evidence (she had in her possession) to substantiate some of what she was saying that goes against the status quo. And the BBC burying (after reporting on the prosecution case) the interim defence case submitted by former Chief Police Officer Graham Power QPM.

Or Jersey's only "news"paper hailing a cop who is alleged to have been leaking confidential police information, during a live Child Abuse investigation, to a "journalist" with a history of supporting convicted paedophiles as a "WHISTLEBLOWER" when anybody with just a fraction of common sense knows former SIO Mick Gradwell should be investigated as a suspect in "Operation Elveden."

Jersey's State Media has consistently either buried public interest/news stories or OPINION MANAGES them into anything that will help maintain the status quo of this, not fit for purpose, feudal government and what many perceive to be a politicised, and corrupt judicial system.

The answer is they don't/won't they just report whatever Press Release they are given, no matter how ludicrous, and keep their heads down too scared to rock the Establishment boat and any "journalistic" integrity is washed away in favour of keeping their jobs and not becoming a victim of "The Jersey Way."

Readers might now be aware of an exciting new online news/magazine channel THE PEOPLE'S VOICE (TPV) and in particular The Sonia Poulton Show. Sonia has interviewed (so far) former DCO and SIO of Jersey's Child Abuse Investigation LENNY HARPER and local politicians Deputies TREVOR AND SHONA PITMAN and she is keen (I am told) to interview others from Jersey. All going to plan, in the New Year, she will be.

The Sonia Poulton Show is broadcast every week night between 1700-1900hrs GMT and is a wealth of information concerning what is buried, or spun, by the "professional" mainstream media and shows us that Jersey's local State Media is only marginally worse than that of the UK and others.

A few nights ago Sonia Poulton interviewed Keith Allen who directed a documentary on the death of Diana Princess of Wales which can, and should, be viewed HERE. As fascinating as the interview was, it was just before Sonia Poulton introduced Keith Allen that was probably the most truthful and accurate monologue I have ever heard from a journalist live on air and simply has to be shared with readers of this Blog.

Can anybody legitimately argue with what Sonia Poulton has to say in this one minute forty nine second monologue and seriously argue that she isn't describing Jersey's State Media?

Jersey's State Media is no more than Guardians Of The Status Quo who daren't challenge those in power............... Which is exactly what a "journalist" is supposed to do.

Credit, and thanks, for this video recording to TPV.


Posted by voiceforchildren at 08:20